Funningsmannasteinur – historical stone had to leave the stage 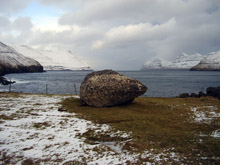 In connection with the establishing of a new road along the ancient coastline of Leirvík yet another part of the – already sparsely preserved – historical environment in the village has disappeared.

It is the so-called Funningsmannasteinur, (“The stone of the man from Funningur”), which was situated in the harbour c. 10-15 meters from the shore at Toftanes in the northerly part of the village.. 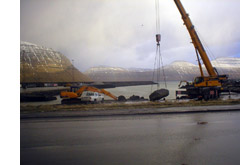 »Heini was known as a man rich of words. He traditionally travelled to Tórshavn at Christmas time every year to trade all the goods produced in his house, and to purchase the commodities, which his household needed.
Once on their way back northwards from Tórshavn on a dark evening, but in fine weather,  they rowed the boat aground in Leirvík. Nobody got hurt, but they lost the entire cargo and the 100 rix-dollar, which Heini stored in the lunch box.
When the people of Leirvík pitied what had happened, Heine replied: „There is nothing to pity: the damage is small, but it is a big shame to row aground!“«. 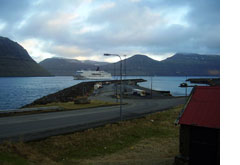 On 20. January 2011 the filling up of the harbour in front of Toftanes had come to the stage, when Funningsmannasteinur was about to be covered forever. An agreement was made to save the stone, which has now been placed on a corner at the entrance to the pier in front of Toftanes.